Flood in the kitchen

Our dishwasher broke, it leaked most of the washing water on the kitchen floor. New washers are very energy and water efficient but our old one was not (it was 30 years old!) and so we had a real flood in the kitchen. Also bad thing is that we have a parquet in that room and you know what happens to parquet when it gets wet, it starts to bubble. I did dry the floor with bathing towels right after the dishwasher had leaked and I assumed that a good drying with a fan would be enough and there would not leave any damage. Next day my dad came to help with removing the old washer and while here he came to the conclusion that the floor will not dry nicely and since he is not a person to waste time he started to rip off some strips from the parquet. We had some parquet left over from some previous renovation and next day my dad and A put the new old pieces of parquet on the floor. 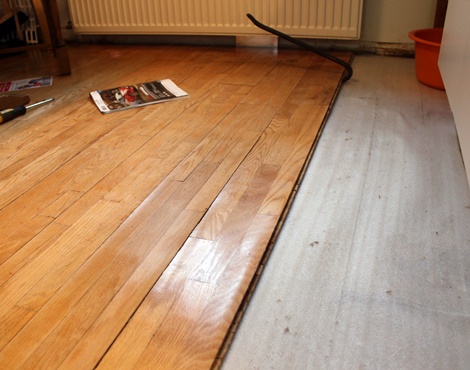 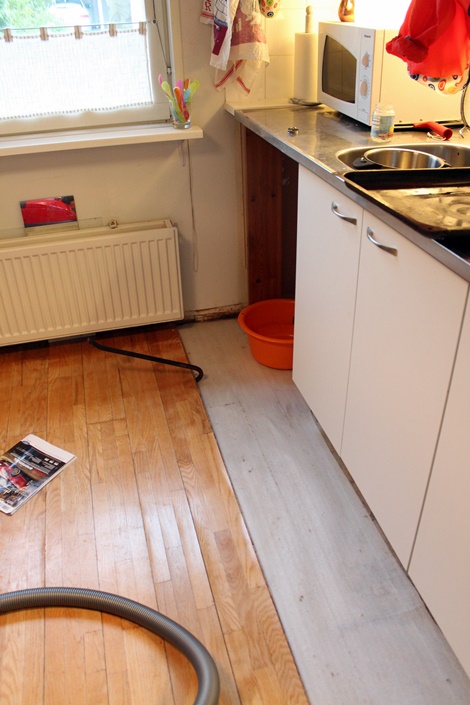 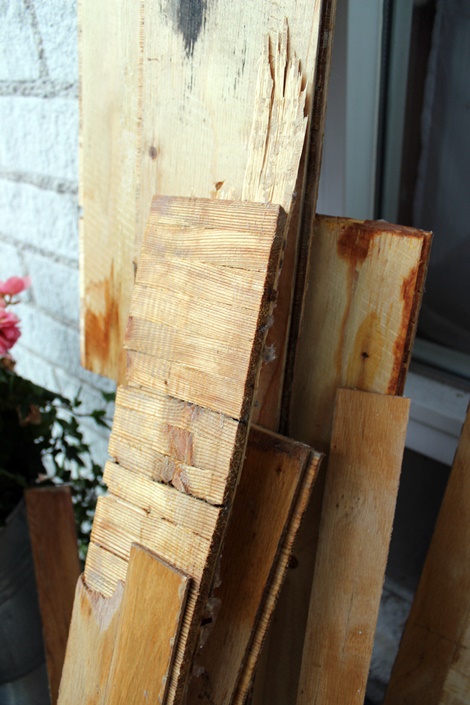 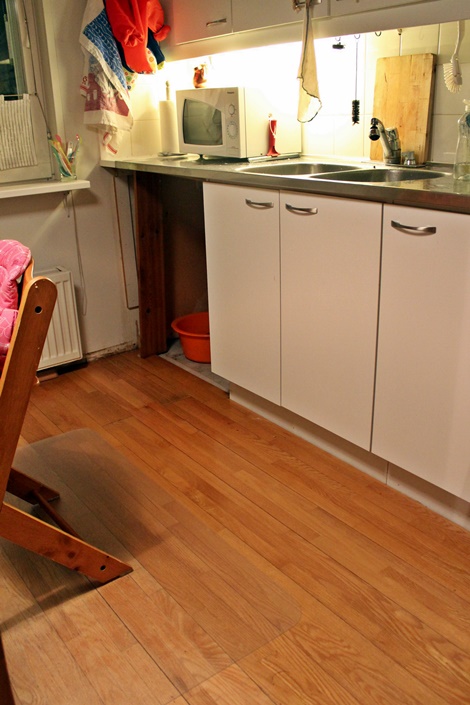 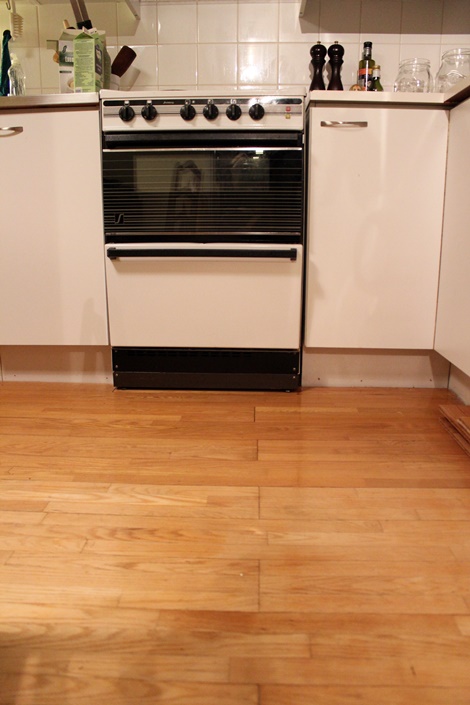 So now we have a new floor. There is bit of a colour difference between the "new" parquet and the old, but I'm fine with that. I have for quite some time planned to do some bigger renovation to the kitchen, so there is no point changing the whole floor now. But that wont happen any time soon. And besides the floor was not that perfect before either, so this colour difference is not a big deal. Next we need to buy a new dishwasher. Oh and put the moldings back.
Lähettänyt onshore klo 09:30 3 comments:

In between of making more cushion covers for the boat (yes those are still unfinished) I made three tetrahedron bags for Likka to play with. The tetrahedron bags have dried peas inside. These as many other of my crafts was inspired by Hupsistarallaa. Norsis had made similar for her son over a year ago. The pattern is from hääräämö blog. I tried to find similar pattern for you in English, but with a quick look I could not find one, so the pattern link is now just in Finnish, but the pictures are pretty good, you might not need it in English anyway. 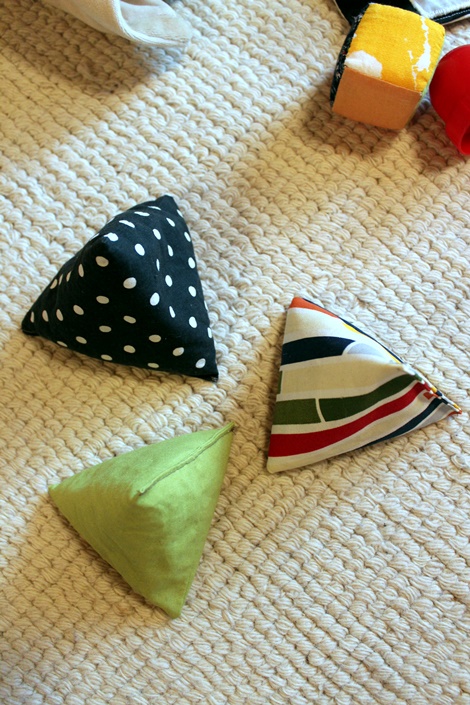 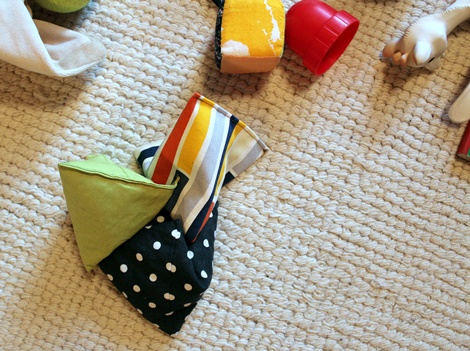 Well hello! Long time no see. Whew, we have been busy, we have not spent much anytime at home. Hmm.. where to start... We've been allover Finland. Well first at Linnanmäki amusement park in Helsinki. It was Likka's first time in an amusement park and she went to six rides already, to some with me, to some with A. Then we headed to Tammisaari in south of Finland to a friends' cabin. There we made a beach. Which means that we shoveled one truck load of sand into the sea. It was lot of work, but it was fun to do some hard labour for a while. Also at the cabin we did some boating. 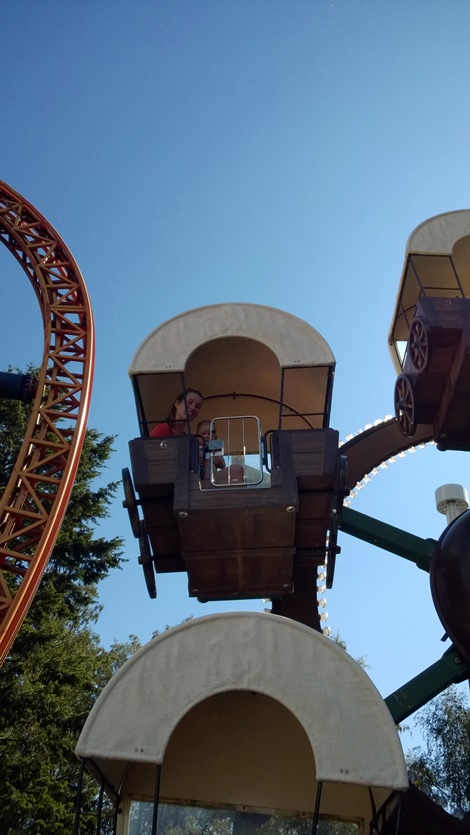 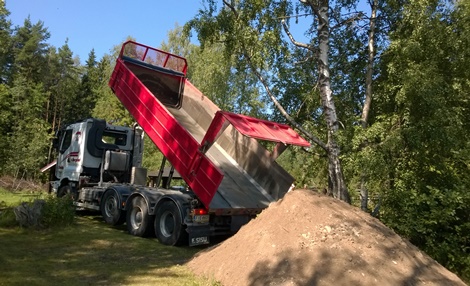 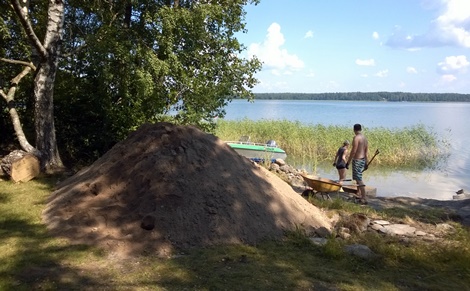 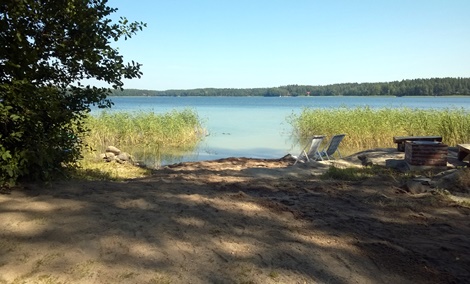 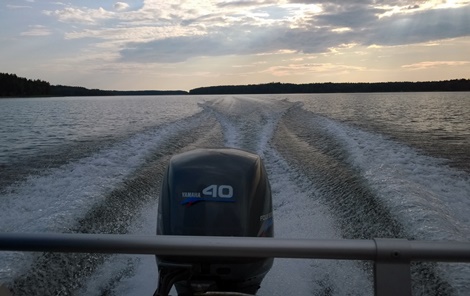 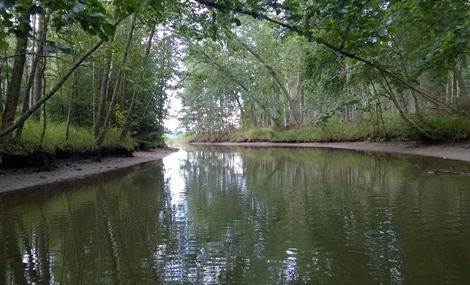 After one night at home we packed the car again and started a road trip to Ostrobotnia where my father's father lives. We drove the whole five hour drive there on one day and I must admit that it was a bit too much, we were awfully tired when we were finally there, the problem was that Likka was not tired much at all since she had slept most of the trip. Well we slept the night at my father's fathers condo and next day visited his lady friend, whom we had not yet seen.

On the afternoon we continued our journey and headed to Tuuri, but on the way there was Isokyrö, a place where a school friend of ours has founded with four other guys a rye whisky distillery - Kyrö distillery company. I tried to call our friend to get more info where the distillery is and if he would happen to be there so we could even get to see the place from inside. Unfortunately I was unable to reach him, but we resorted to locals and asked a random passer-by if she would know where to found the distillery and of course she knew where it was and also was able to tell us that next to the distillery is a harvester and agriculture fair (!) and that in the distillery they are having tours every hour. So even though I did not get a hold of our friend we were still able to see the distillery from the inside and hear stories about the history and distillation process. We also visited the agriculture fair, clearly we were not the target group for it, but it looked so fun and what are the changes of running into such an event anytime again.

After spending a few hours in Isokyrö we drove to Tuuri (picture of the giant horse shoe is from there). In Tuuri is placed one of the biggest shop of whole Finland, it is one single giant building and ridiculously large parking lot in the middle of nowhere. The stuff in the shop is nothing special, same stuff you can buy anywhere, but the place is a sight, so ridiculously big and as mentioned located in a place far from any bigger town or city. After spending way too much time in Tuuri we drove to Ähtäri where we had booked a  farm accommodation for one night.

In Ähtäri on the next day we met a mommy friend of mine, her husband and their son who is five days younger than Likka. We went to the Ähtäri zoo together. Unlike most zoos it has mainly local animals, which in our case are bears, dears, foxes and so on. I was pleasantly surprised with the zoo, there we actually saw lots of animals, usually in zoos the animals have hidden somewhere and you can only see what appears to be an empty cage. In Ähtäri we also experienced one of the biggest thunder storms I've been in, luckily we had left the zoo area already and were in shelter looking at the lightning.

From Ähtäri we drove to Virrat, where another friend of ours has a cabin. There we spent couple of days and then headed home. 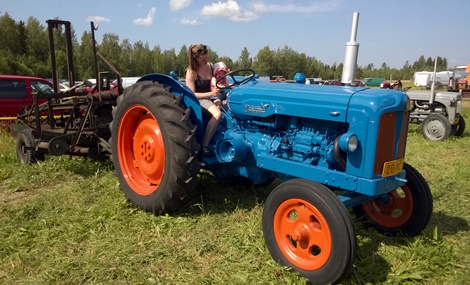 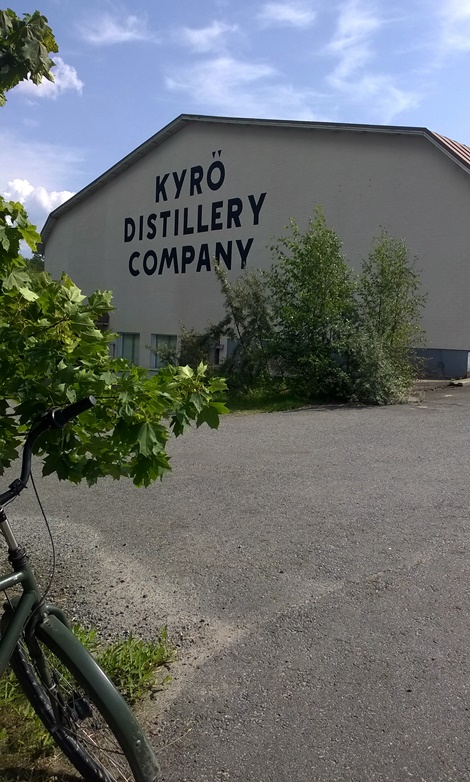 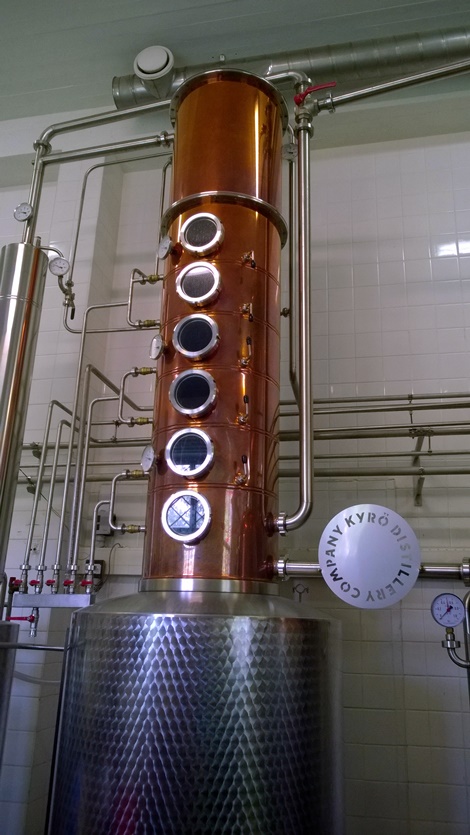 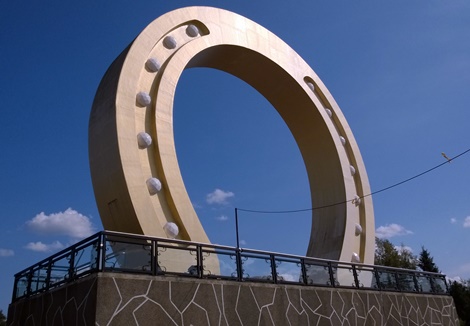 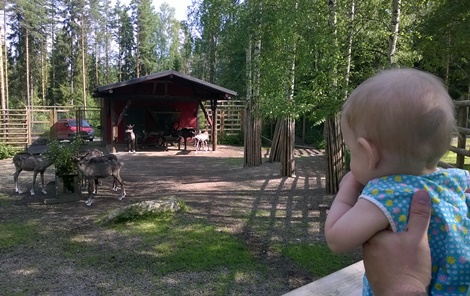 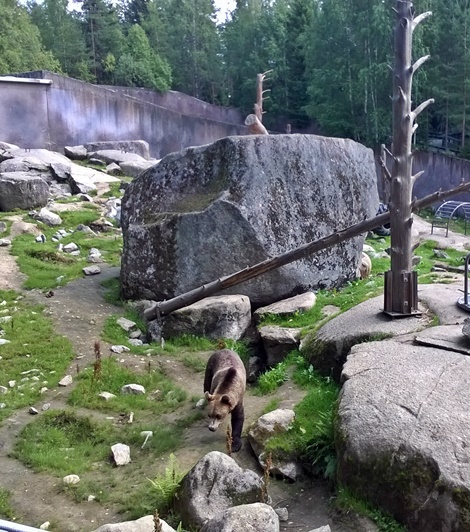 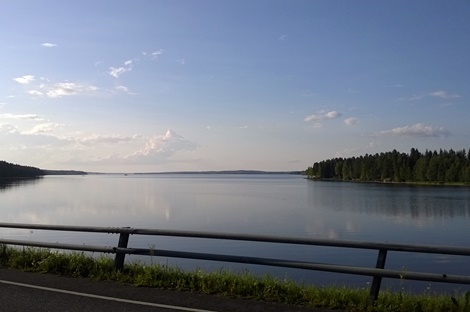 Well then on the third vacation week we went sailing. A's parents had sailed our boat to Kasnäs in south west parts of Finland and there we changed the crew. We had only sailed very short trips with Likka before so I was bit afraid if it's going to go well, but Likka took the sailing very nicely. The biggest problem on the boat with Likka was the sun and the heat. We had to somehow shade her all the time but so that she would not feel too hot. We dressed her into pajama overalls and tried to keep her in shade and offered water to drink frequently. We had a bike seat for her on the boat which we attached to the spray hood. She mostly enjoyed sitting and even sleeping on that seat, so it was easy to sail with her. We sailed on a fairly small area and ended our sail to Hanko where A's parents took over and are now as I'm writing this sailing the boat back home. 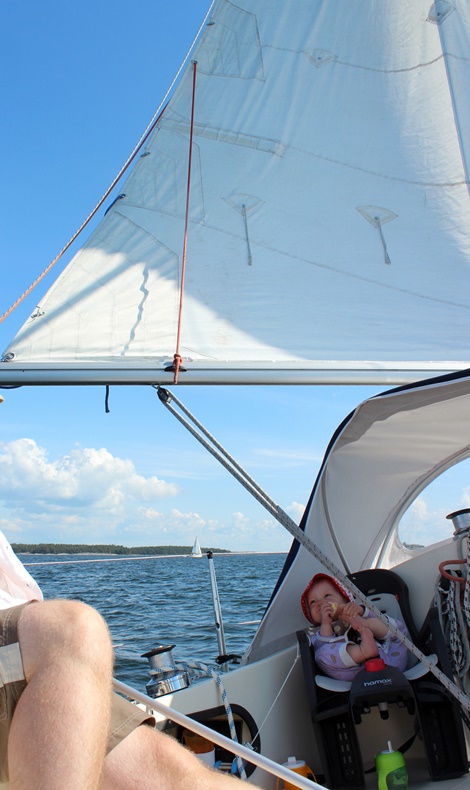 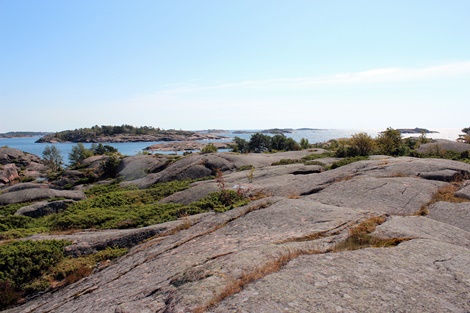 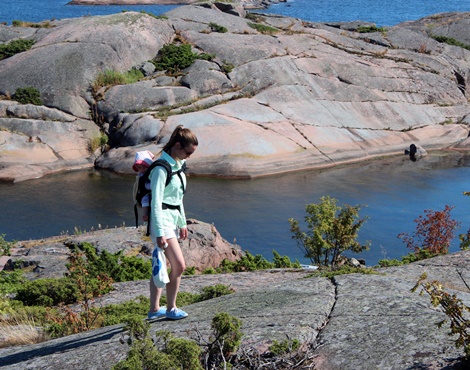 So far we have had an amazing summer holiday. Sorry for the long absence from the blog, but I have been way too busy with all the traveling. I'll post soon again.
Lähettänyt onshore klo 09:30 2 comments: