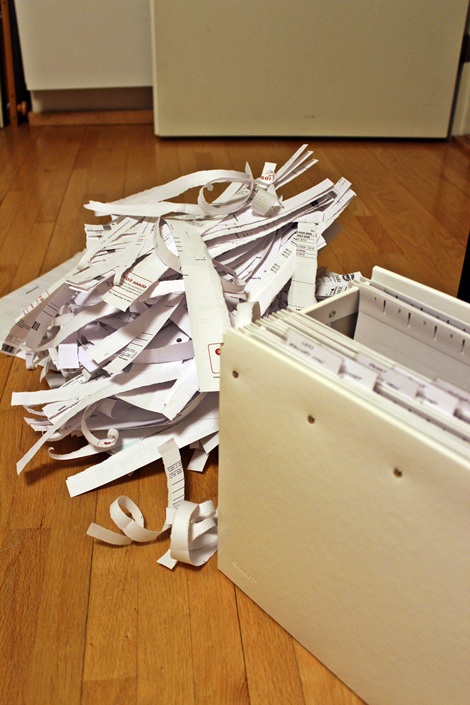 After each New Year I go through my papers from the two years before, which this time meant papers from 2011. I usually keep all bills, tax papers, bank statements, insurance things and so on when I get them, but yearly I go through them and throw out papers that are no longer needed. I don't have a shredder so I rip the papers into smallish slices. It really does not take long and I get such a pleasure from the ripping. It's so pleasing to get rid of paper. When all are ripped I mix them up a bit before I take them to the paper recycling bin. I doubt anyone is intrested in the papers, but incase they would be I'm making it just bit more difficult for them to check out my personal papers. 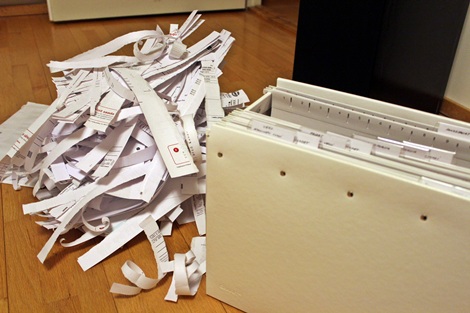 On sunday I was with my friend in Marimekko factory outlet on a sale. And I must admit that I maybe lost it a bit. I bought fabric and sewing kits I have no particular plans for. I usually try to only get stuff I know I need and will use soon. But everything was so cheap! (compared to the normal price). 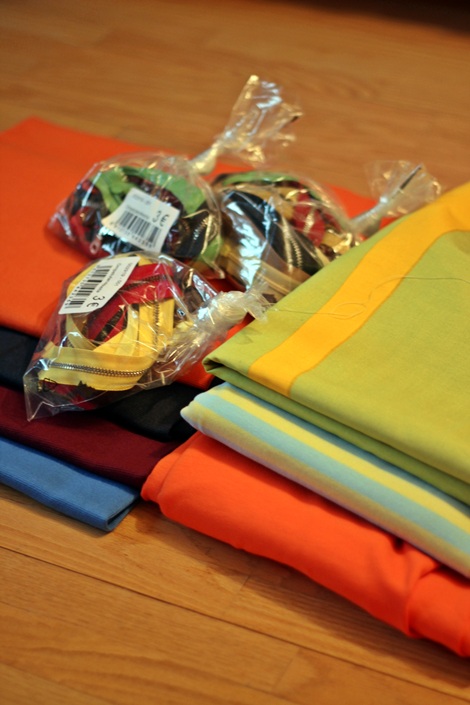 I bought orange and stripy jersey knit fabric, some green shade cotton fabric and a packet of welt rib knit fabric in four different colours. Also I bought three sets of sewing kits, now I'm well equiped with zippers, I think there were almost 30 zippers altogether and lots of buttons. I also bought socks but those are not in the pictures. I'm surprised by the colourfulness of the fabrics I bought.

I have also now been super inspired to do lots of sewing and knitting and I have like gazillion projects unfinished. The office where I do my sewing is now a massive disaster. 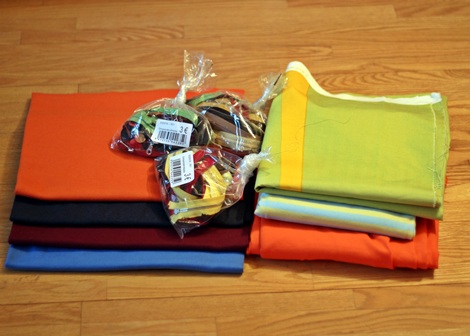 Does anyone else except Finns pull sheets? Do you even know what I'm talking about? I think originally pulling the sheets was used to fold them to a nice size so they fit well into the mangle. Many people still do pull their sheets even though they do not own a mangle, also many don't. My parents have a mangle, although my mother or father do not very actively use it. Also A's parents have one and A's mom uses it quite often. Ever since I was a kid I have learned that sheets need to be pulled before those are placed into the sheet closet. I have never questioned this method. Even if the sheets are not mangled they do straighten quite well just in the pulling and are easy to fold. Only thing is that the pulling requires two people, or one person and a tight door.

Flat sheets both single and double size and single duvet covers are folded in different ways. I think this is because of the standard width of the household mangle. But it appears that this folding method also makes the sheets handy size for the standard Finnish closet. So what happens with the sheets is that two people take a hold of the sheet from the ends. The sheet is first folded in half lengthwise, then again half in lengthwise. The other flap is dropped down and it's retrieved to the other side. This way the sheet forms a W shape. Then the sheets ends are grabbed firmly and the sheet is pulled. I think it's fascinating how some sheets stretch a lot and some very little while pulling. After few firm pulls the sheet is folded like an accordion and now this could be easily mangled, but since again I don't have the mangle I just place the sheets into the cabinet. 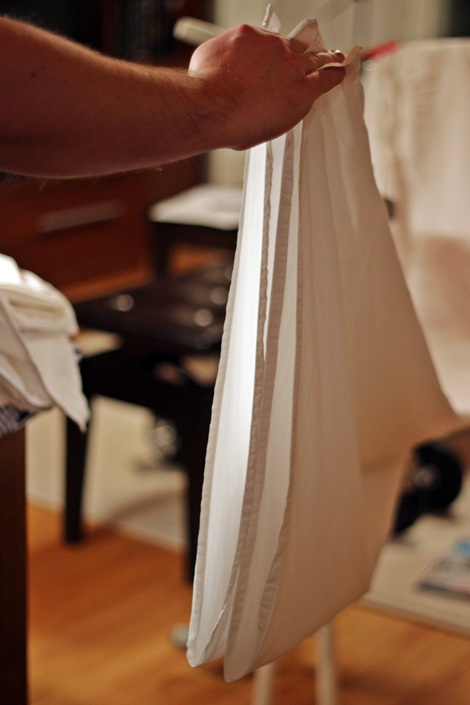 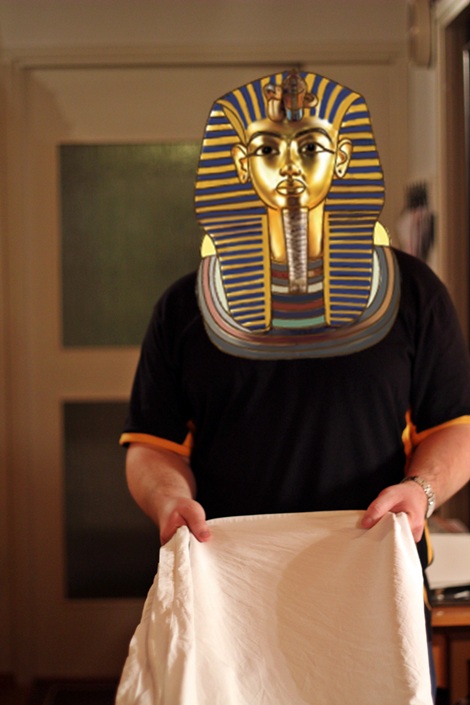 I'm pretty sure you think we are loonies to do this so pedantically. But this way the sheets make such a nice piles to the linen cabinet and the fact that it usually helps to have two people doing the folding makes it a much more pleasant chore. Even though I usually do need to remind A of this chore and he is not too eager to start it, it's still kind of nice that there is this one thing I cannot be single-handedly responsible of. 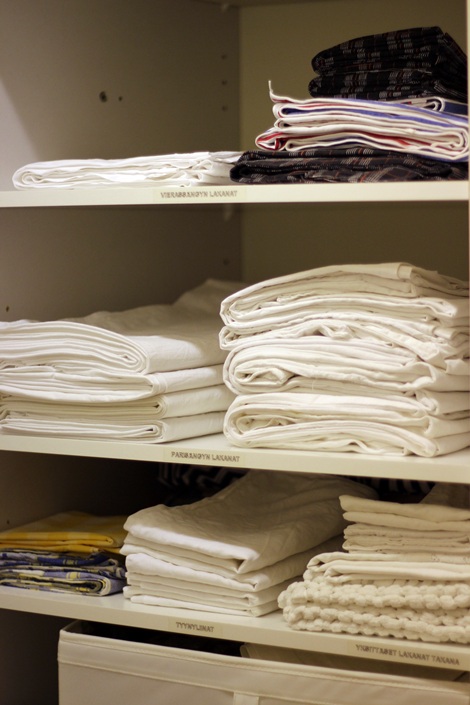 For all you who have a sauna, ever have drinks with you in the sauna? We sometimes do and if there happens to be snow outside we collect some to a bucket and push the drinks into the snow. The snow keeps the drinks cold for a very long time. 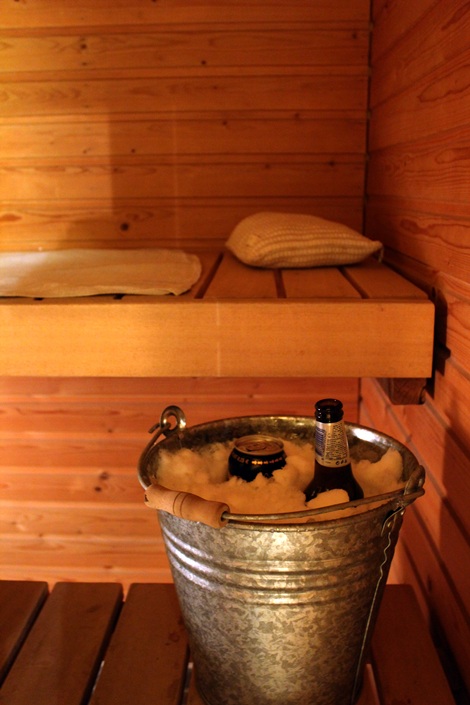 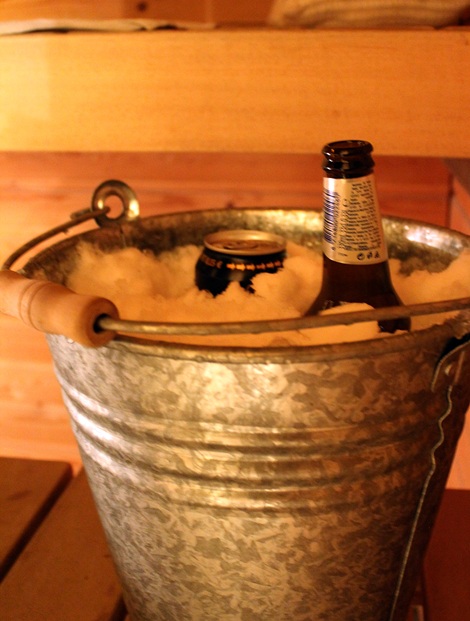 I realized it's fully possible to knit and browse blogs simultaniously, I just needed to use my feet. Bit tricky, but it worked! 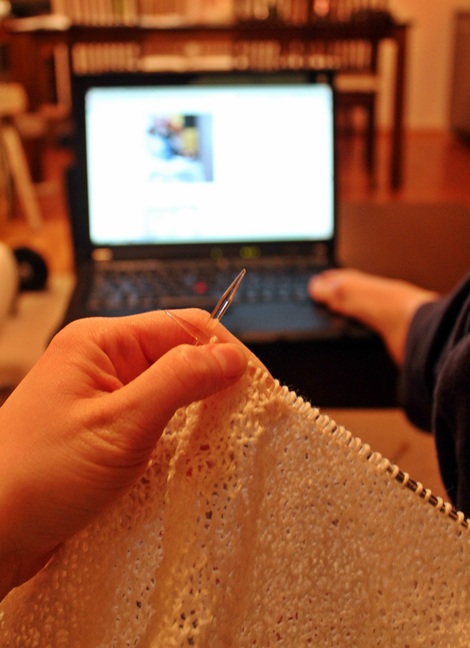 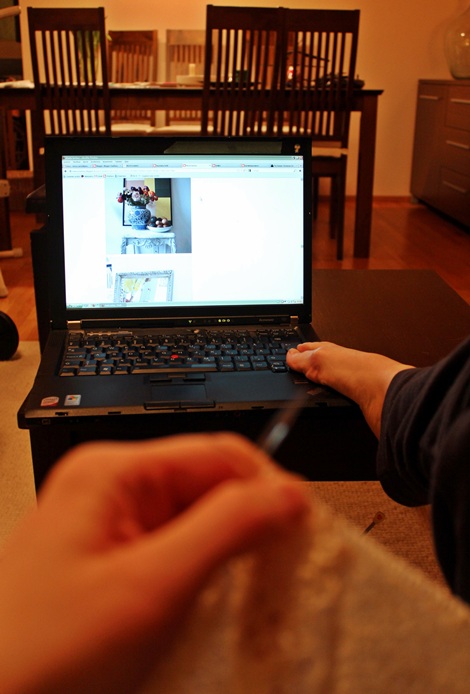 Email ThisBlogThis!Share to TwitterShare to FacebookShare to Pinterest
Tunnisteet: nifty

I have been agonizing what kind of labels I want for the wine we made earlier on the fall. For some reason I wanted to have something cool, but I still so far have not figured out what is that cool label I want. I had promissed to give some wine and cider to my colleague who we got the sweet apples from to make the wine and cider. I had been avoiding taking the bottles to him, because I had wanted to label the bottles first. But on sunday I decided he has waited too long and then just grabed a white marker and wrote straight on the bottle its content. 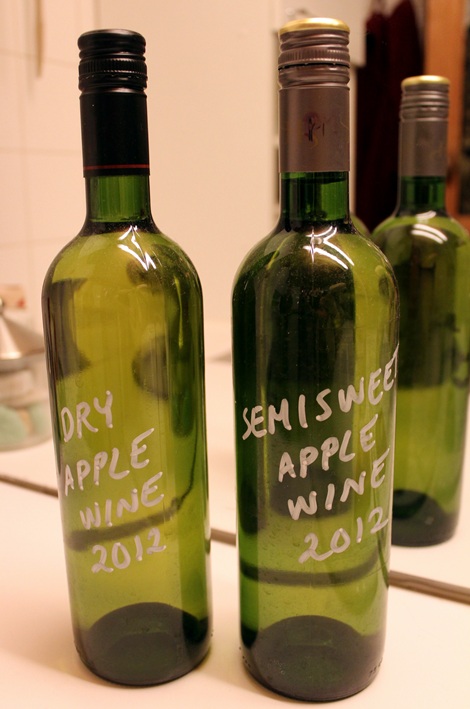 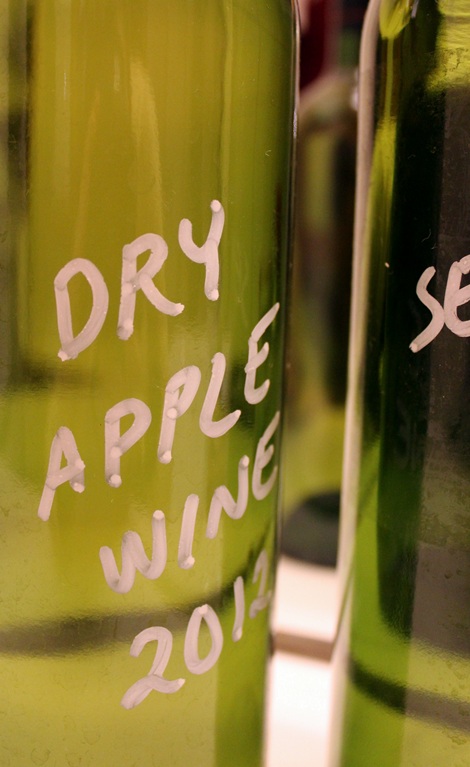 And I think those turned out really cool, so I decided to label all bottles like this. I really like them.
Lähettänyt onshore klo 09:30 11 comments:

Email ThisBlogThis!Share to TwitterShare to FacebookShare to Pinterest
Tunnisteet: food and drink, nifty

Project bound to be doomed 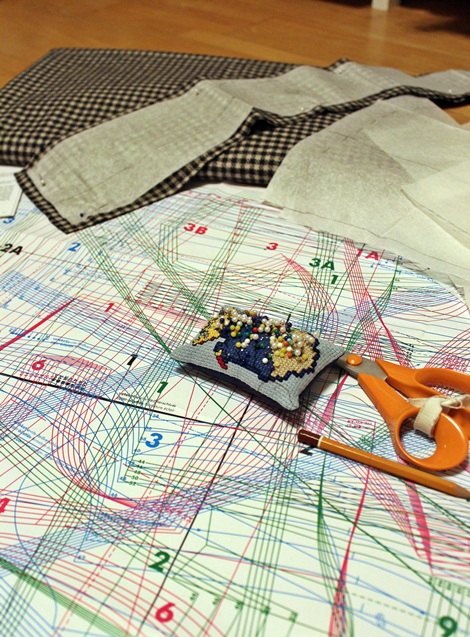 I started a project that I allready know will be blood, toil, tears and sweat. I will make a jacket using a pattern I got from a Ottobre magazine. I'm not good at following patterns, I think I've only sewed one shirt or something in school using a pattern and I remember that it was crap. And the round parts were sooooo annoying. I'm sure I get furious of the whole project hundreds of times. But eventually it will get done, hopefully before spring because it's supposed to be a spring jacket. We'll see... 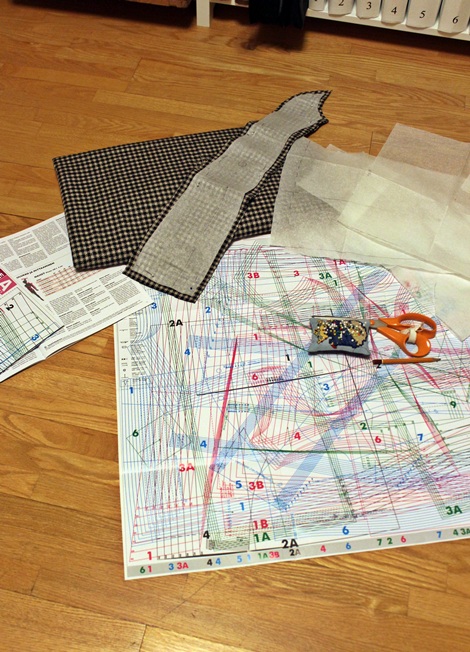 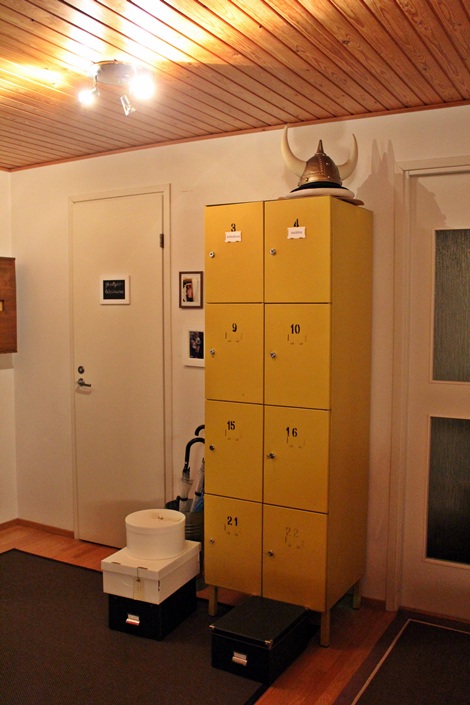 You saw this metal cabinet partly already. I found it from the metal trash from work, I had been looking for something like this for quite some time. It barely fit into my car, but I'm really happy it did. I'm not sure A is that happy about the cabinet. He thinks it's hideous and would fit way better into a garage or similar. A said the cabinet might be better painted white. But I don't know, I like the old, scratched look. 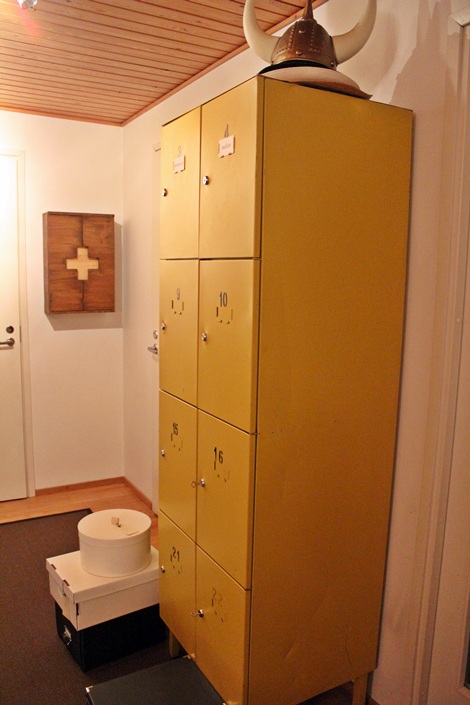 Anyway he did help me to break into the cabinets, only two of the doors had keys, the rest were locked. Ignore the boxes on the floor. 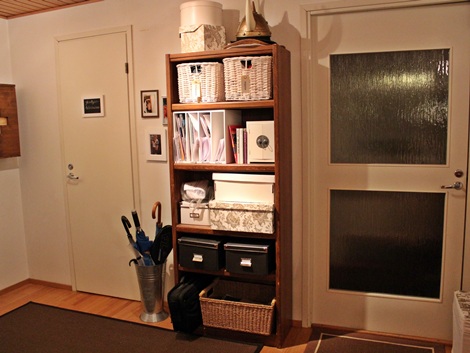 On the picture on top is the shelf we used to have in the entry. I found it so dull, handy yes, but so dull. So what do think, are you with me or with A?


Oh yes, and linking to